Thursday April 4 Matthijs Vink, board member of H20, spoke during the BVA member meeting in esports Game Arena. Matthijs has been playing handball for 19 years and is as a former top athlete active in esports. During the meeting he shared his esports knowledge from the perspective of an athlete. In the course of 2019, H20 will develop esport initiatives in the region of Amsterdam. Esports is becoming increasingly popular among the young target group. The live streams of tournaments, events and professional gamers are popular on social media. In the Netherlands, more than 78%(!) of the population between the ages of 11 and 20 follow esports.

Various speakers spoke during the BVA member meeting. EsportsXperts was prevent and shares esports definitions and players/followers insights. VodafoneZiggo shared a case study about the Vodafone ESL sponsorship and Newzoo shared esport facts and figures (global & local). The meeting was for advertisers who are looking for concrete tools and information to help them perform their tasks in relation to esports. 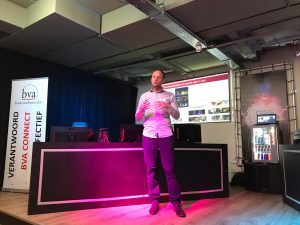 May 29th is the date of the official announcement event of the Tech & Esports Campus.